Over the course of human history, the goal of all protest has been to change minds and influence behavior.

Whether it is the Civil War, the Civil Rights Movement, or Black Lives Matter, all dissent, be it corporate or individual, has as a common denominator one, if not both, of the aforementioned objectives. But given our normal propensity to focus on what a particular protest may or may not ultimately be designed to accomplish, what is often overlooked is that antecedent to the aims of any protest are its motives.

Notwithstanding the particular issues being contended or the methods employed to bring them to the attention of the masses – a requisite if any protest is to achieve its stated goals – what is intrinsic to any complaint, demurral, or remonstration is a standard of righteousness that is borne of a worldview – a moral or ethical framework – that is grounded in an awareness that there exists such a thing as truth.

“The high-minded man must care more for the truth than for what people think.” – Aristotle

Contrary to what many believe today, when it comes to matters of protest the predominant question is never a matter of right and wrong but of truth.

There can be no consideration of what is right or wrong about an issue, be it social, cultural, political, or otherwise, apart from first establishing what is the truth about the matter being argued as right or wrong.

That I said “…what is the truth” versus “…what is true” is not a misstatement.

Understanding the distinction between these two paradigms is crucial to any conversation about issues of social justice, because by definition truth is objective (impartial, unbiased, unprejudiced, nonpartisan) whereas that which can be said to be true is subjective (personal, individual, emotional, instinctive, intuitive).

The intrinsic discordance between subjective and objective truth is why a person like former San Francisco 49ers quarterback Colin Kaepernick can, on the one hand, be inspired to protest police-involved shootings of black men, women, and children by kneeling during the playing of the Star Spangled Banner before a football game, while on the other hand remaining deafeningly silent, at least publicly, about the millions of unborn black babies who are aborted each year in the very same nation whose anthem he so despises.

It is this same ideological dissonance that serves as the impetus for Megan Rapinoe, a player on the U.S. Women’s National Soccer Team, choosing to align herself with Kaepernick by kneeling when the national anthem is played before a match.

But where was Rapinoe when 9-year old Tyshawn Lee was shot five times in a retaliatory act of violence by a black gang member while on his way to his grandmother’s house? Or Nykea Aldridge, the cousin of Chicago Bulls star Dwayne Wade, who was, allegedly, shot and killed by two brothers, who are black, while pushing her 3-week old child in a stroller near a school?

Tell me, where were her protestations then?

On second thought, maybe I’m being a little too hard on Rapinoe. Perhaps she was simply unaware that the Star Spangled Banner was already America’s official national anthem when both Lee and Aldridge were murdered (and has been since 1931.)

All this to say that a subjective paradigm of truth leaves people like Kaepernick and Rapinoe free to pick and choose which “injustices” they will place their supposed righteous indignation on display for all to see. Whereas an objective standard of truth views all injustice – regardless of ethnicity or socio-economic station of either the offender(s) or victim(s) – as wrong.

“What is truth?” – Pontius Pilate

The question society faces today is the same as what Pontius Pilate posed more than 2,000 years ago during the first Roman trail of Jesus Christ (John 18:28-38).

In fact, the question of truth is so fundamental to our understanding of right, wrong, justice, and injustice that the only way anyone could ever protest anything under the pretense that it is right or wrong or just or unjust, is against an objective standard of truth that universally applies equally to all of God’s image-bearers.

And the only source of objective truth the world has ever known is found in the Word of God (Hebrews 4:12). 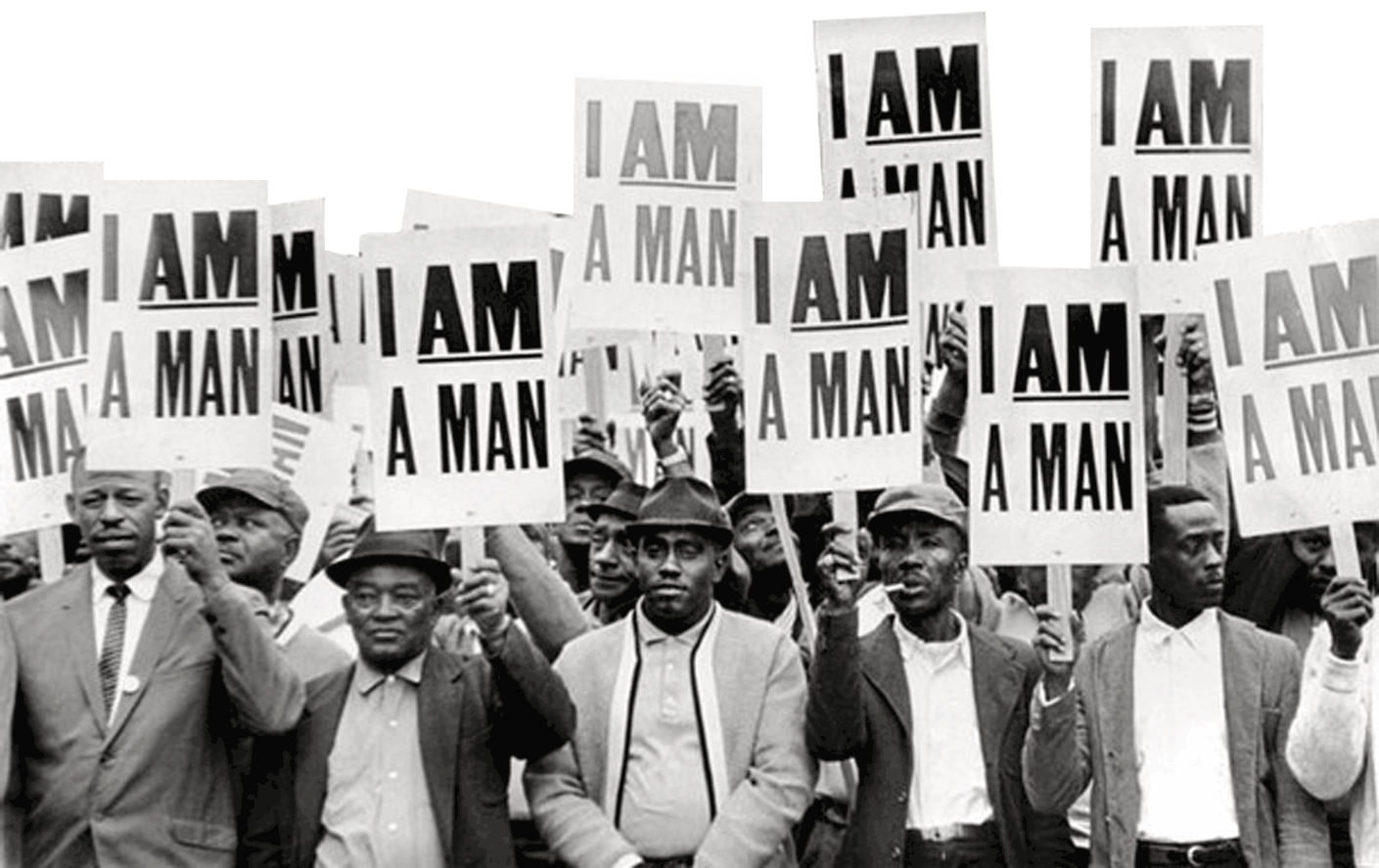 The objective truth of the Bible was central to the Civil Rights Movement of the 1960s.

It is the objective truth of the Word of God, which is applicable to all human beings regardless their ethnicity or nationality, that validated both the Montgomery Bus Boycott of 1955-56 and the Woolworth lunch counter sit-ins of 1960 as righteous, and therefore, necessary undertakings relative to the principle of imago Dei.

“The early Christians rejoiced when they were deemed worthy to suffer for what they believed. In those days the Church was not merely a thermometer that recorded the ideas and principles of popular opinion; it was a thermostat that transformed the mores of society.” – Dr. Martin Luther King, Jr., Letters From a Birmingham Jail

A primary reason Colin Kaepernick and Megan Rapinoe, and other athletes like them, would choose police-involved violence against blacks as the impetus for protesting the more than 200-years old Star Spangled banner as opposed to, for example, the decades-long strategy of Planned Parenthood of deliberately placing abortion clinics in minority neighborhoods, is because of a view of right and wrong that is filtered through a paradigm of truth that is subjective rather than objective.

But, you see, what they – and we – must understand is that all truth, and all that could ever be regarded as true, originates with God.

That God declares Himself the “Alpha and the Omega” (Revelation 22:13) is to be understood not only in an eschatological context, but also in the sense that our epistemological understanding of everything about our existence in this world is both founded and consummated in Him and in the objective truth of His revealed word.

Apart from the Word of God not only is there no right or wrong or justice or injustice, the very concepts themselves would be non-existent because we possess neither the inherent capacity nor the desire to want to do what is right or just to one another (Genesis 6:5; Jeremiah 17:9).

At the risk of being misunderstood in what I have said in this commentary, I want to be clear that I do not begrudge Colin Kaepernick, Megan Rapinoe, or anyone else for that matter, the right to protest.

That I would be so arrogant as to take issue with either of them for exercising their Constitutional right to disavow the Star Spangled Banner would be hypocritical on my part, especially when America as a nation was founded on protest.

Would I have taken the same approach as Kaepernick and Rapinoe? No, I would not. I consider myself blessed that God, in accordance with His sovereign will, foreordained that I would be born in America and for that I am profoundly grateful (Acts 17:26).

Having said that, no, America is not perfect. That much is true. But, then, America was never meant to be perfect. Where the notion originated that America is somehow obligated to live up to some subjective, ever-shifting standard of collective righteousness I do not know.

There is no nation that is perfect. There has never been nor will there ever be. There can be no perfect nation whose inhabitants are themselves innately imperfect. To believe otherwise is to live in a state of perpetual naivety.

“These are the things which you should do: speak the truth to one another; judge with truth and judgment for peace in your gates.” – Zechariah 8:16 (NASB)

I fully expect that over the next several months, if not longer, there will be others, perhaps even you, who, for whatever reason(s), will feel obligated to come alongside Colin Kaepernick in protesting the national anthem whenever and wherever it may be played.

And such is your right as an American citizen.

Nevertheless, as you protest, consider that the grievances you hold against America have more to do with words spoken by Pontius Pilate two millennia ago than those penned by Frances Scott Key two centuries ago.

Objective truth demands that our indignation not be selective.

We should not play the hypocrite by compartmentalizing and partitioning our morality so as to protest some acts as being unjust and not others. For at the heart of all protest is the question, “What is truth?”

All other questions are secondary.

The Sin of Injustice is No Excuse for the Sin of Racism John Mark Syndrome: Pursuing Social Justice at the Expense of Christian Unity