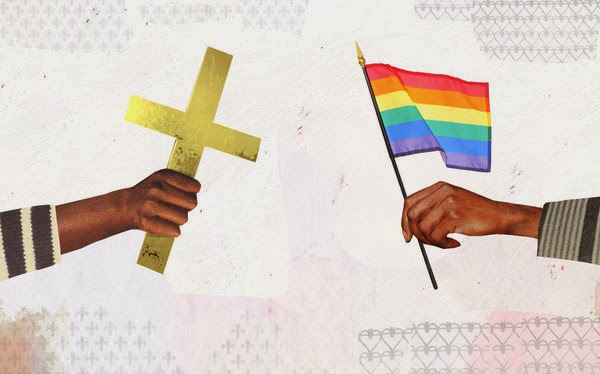 Marriage is first and foremost a spiritual union not a civil one, because both its definition and purpose originate from a spiritual Being (John 4:24).

Marriage is a God-ordained institution whose essential purpose is inherently antithetical to the very concept of “homosexual marriage” (an oxymoron if ever there was one.) God’s command to “Be fruitful and multiply and fill the earth…” (Genesis 1:28) was given to the male and female whom God Himself created in His own image (Genesis 1:26-27).

That husbands and wives are to “be fruitful and multiply” is a mandate that cannot possibly be fulfilled by those who are practicing homosexuals or lesbians, because it is biologically anathema to God’s created order (“male and female He created them” – Genesis 1:27.)

It is this divine order that the homosexual lobby arrogantly finds so offensive.

Having rejected God’s spiritual purpose and design for marriage, the homosexual lobby desires to redefine marriage in strictly worldly terms in a coordinated, well-funded effort to wholly subvert God’s established order for husbands, wives and the “fruit” (children) born to them from these unions.

But that’s only a first step.

The ultimate goal of the homosexual lobby is to altogether abolish any semblance of traditional marriage from society and replace it with their own humanist version of it.

This objective demonstrates the innate depravity of man in that we volitionally choose to rebel against God’s divinely-ordained boundaries, which are lovingly established for our own good, as opposed to yielding to such limitations and reaping the benefits.

It’s been that way since the Garden of Eden.

Given the extent to which such a war is being raged against God’s original design for marriage, it is interesting how silent the Black Church has remained on this important theological matter.

There is perhaps no demographic that has been so decimated by the continuing decline of the traditional view of marriage as black families. This deterioration is due in large part to the failure of churches with historically or predominantly black congregations (hence the term “Black Church”) to preach the unadulterated, life-transforming gospel of Jesus Christ, which includes marriage.

In many Black churches, the true Gospel has been hijacked by the falsehood of liberation theology, which positions the historic Christ of the Bible in terms of an oppressive racist invented by white people so as to control black people and keep them enslaved (as if those who espouse liberation theology speak from experience about what such bondage is like.)

Having originated with theologian James Cone in the 1960s and the suffrage of black Americans that birthed the Civil Rights Movement, the themes of oppression and injustice upon which liberation theology is largely based now inculcate freedom of sexual expression, including homosexual marriage, as a core tenet which the black church must now embrace.

In fact, many have already done so.

Ironically, as theology, liberation theology has succeeded not in grounding its adherents more deeply in the knowledge and wonder of God, which is what the word ‘theology’ means by definition (“the study of God”), not to mention God’s original design and plan for marriage, but in convincing black Christians, especially, that marriage, in general, and homosexual marriage, in particular, is not a biblical issue but a secular one.

Instead of applying God’s Word to our life experiences, liberation theology teaches us to apply our life experiences to God’s Word. As such, the Bible, the principles and precepts of which served for generations to establish and sustain the black church from the era of Civil War to the era of Civil Rights – a period of 100 years – has been set aside in favor of a false gospel of individualism and self-satisfaction (or what liberation theology would term as ‘justice’.)

And what has this “justice” wrought us? I’m glad you asked:

These are only a few of the societal repercussions as a result of refusing to view marriage and family in terms of God’s divine paradigm. If the Black Church insists on abandoning its historic missional charter in favor of a false gospel of inclusion and acceptance (which, by the way, Jesus never preached) it can expect more of the same.

The silence of the Black Church on homosexuality and homosexual marriage is deafening.

This begs the following questions:

If the latter, then, the Black Church must come to understand and accept that regardless what the world may say, the sin of homosexuality has no expiration date. It is still sin. God has not changed His mind about homosexuality, or any other sin for that matter, simply because the calendar reads 2014 and His first admonition against it was in the Old Testament.

Those who would argue that two people of the same-sex should be able to “marry” if they “love each other” fail to understand the theology of God’s love. Their theology of God is that His love is without boundaries.

The marital parameters God established are for our own good; and when we violate those restrictions we reap the devastating consequences, both individually and collectively as a society.

The concept of traditional marriage which, in truth, is biblical marriage, must become a priority for the Black Church for two reasons primarily:

The Black Church is not immune from the pressures and distractions of becoming more like the world in order to reach the world (for example, the church at Corinth.) Nevertheless, it must stand firm and not waver from God’s unambiguous declaration that marriage is between one man and one woman, while also recommitting itself to redeeming the pursuit of marriage among those who are yet unmarried.

Marriage is much more than an exercise in civil ceremonialism and tradition. It is an idea that originated from the very mind of God Himself.

If the devastating effects of cohabitant and fatherless homes on black families is not enough to convince you that the Black Church has a role to play in reversing those trends, then we are in even worse shape than I thought.

Serving you through Him,